In The Spanish Loop

Racing around in circles has long been a human obsession, Homer mentions Diomedes winning a chariot event in Ancient Greece, Charles II of England introduced horse-racing rules in the 17th Century and in 1870 someone nailed a lot of planks in an oval to build the first velodrome.

In 1901 in Knoxville, Iowa some early automobile adopters decided to pit their vehicles against each other on the horse-racing track and motorsport was up and running.

Spain’s first official Grand Prix (the name was nicked from an international horserace in France) was held in 1913 on a bone-shaking 300km road circuit at Guadarrama. In 1923 the event moved

However, this ‘new home’ only lasted one event before going bust (the track is still there and drivable if you have a rather large pair of ‘cojones’) and the 1926 edition was back on a road circuit in Bilbao. After a couple of successful years, the Wall Street crash and a small matter of the Spanish Civil War meant the next GP wasn’t run until 1946. Back in Barcelona, the Penya Rhin Grand Prix was on a street circuit in Pedralbes.

It wasn’t until 1951 that Spain officially returned to the international racing calendar with legend Fangio winning his first world championship in an Alfa on the Pedralbes circuit. In 1968 Spain gained a permanent spot on the F1 championship roster with the Jarama and Montjuic circuits being used as alternating hosts.

A horrific accident killing 4 spectators at the 1975 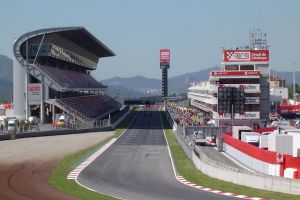 GP led to the Montjuic circuit being abandoned and Jarama became the race’s home until 1981.

A rather strange episode involving a golf course led to the 1982 race being cancelled and once again Spain dropped off the racing calendar until a new track in Jerez was given the event in 1985 and there it stayed until 1990.

Catalunya, long being a hotbed for motorsport was keen to get back in the action and a new circuit was constructed at the turn of the decade. A year before the arrival of the ‘92 Olympic Games, Formula 1 moved to the spectacular Circuit de Barcelona-Catalunya just north of the city. It has been here ever since.