Firstly a very ‘Happy New Year’ to everyone on the Western calendar and a ‘hope December was fun (under the circumstances), to everyone else.

Here in Barcelona we are just getting ready for the final phase of the somewhat odd festive season which involves even more presents, some fuel-based child abuse and of course a cake. 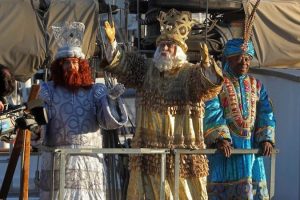 Before a big fat bloke and his little helpers muscled in on the act, the Spanish traditionally only gave and received presents on the night of January 5th. Why? I hear you ask. Well, this was the night that the Kings arrived to honour the birth of Jesus with three gifts, only one of which I can spell.

So this Wednesday night, children up and down the country will stick a pair of shoes by the window, stuffed with carrots and straw for the camels and hope they wake up to a nice array of goodies. Now if they have been good, there will be footwear full of presents waiting for them the following morning, if not, just a lump of coal.

Quite why coal is the punishment of choice remains a little bit hazy, but unless the offspring in question happens to own a steam engine or a power station, I expect the disappointment on their face after receiving a fossil fuel in their trainer is priceless.

Now the big difference between the Three Kings and Mr Claus is that the children get to watch the Royals rock up on their camels and ‘La Cabalgata’ or cavalcade is a tradition in every city, town and village in the country.

Obviously these are still strange times and the 2022 ‘experience‘ is going to be significantly more distanced than usual. But I suspect with the current balmy temperatures sweeping across the nation, parents wont be getting away with the ‘hey kids, let’s just look out the window’ line from last years freezing procession .

So Wednesday afternoon a large ship will appear with a very special cargo. Once safely ashore the royal caravan will make its way up to Placa Catalunya and onto Placa Espanya. The Three  Kings, loads of camels, wagons full of presents, dancing girls, marching bands and a very, very large cart of coal winding their way through the streets of the Catalan capital with their highnesses throwing sweets to the excited niños. There may be a few less socially distanced families this year, but even so viewing space roadside will vanish  quicker than a British government Brexit minister. 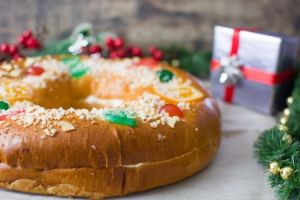 After a slap up something, the ‘Roscon’ then appears. This is a very large doughnut-like cake filled with cream or custard, topped with glacier fruit and a crown in the centre. Hidden inside are a small figurine of Jesus and a Faba bean.

So this Wednesday in Barcelona or elsewhere on the right-hand bit of the Iberian peninsular, if you happen upon a stray camel, a crying child holding a piece of coal or someone choking in a 50% open restaurant on a statue of ‘The Saviour’, you might not know what to do but at least you will know why.