The Basílica dels Sants Màrtirs Just i Pastor can be found in the back streets near to Placa Jauma in one of the oldest areas of the Gothic Quarter. Recent archeological analysis has confirmed that there has been a ‘Christian‘ presence on the site since the 4th century. 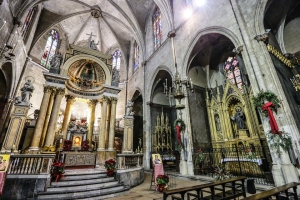 The unassuming outside hides a beautiful example of Catalan Gothic architecture with more than a couple of surprises for the visitor. The current building dates from the 14th century, constructed on both a Romanesque chapel (4th century) and later a Visigoth Basilica (6th century).

As you enter, the nave, reflecting the simplicity of the Catalan Gothic style is divided in six sections and starkly contrasts with the more ‘jazzy’ Neoclassical and Neo-Gothic decoration of the side chapels and the fabulous altar.

The main altar is pure neoclassical and was built between 1816 and 1832. This replaced an earlier altar (1537). You can climb the steps to the side to touch the Black Virgin, which watches over the alter. Legend has it, that the original sculpture (believed to have been carved in Jerusalem) is the one now found at the famous Montserrat Monastery, moved there for safe keeping during the Moorish occupation of Catalonia.

The chapel of Sant Feliu houses one of the best examples of Catalan altarpieces, that of the The Passion, a magnificent work by Pere Nunyes, painted between 1525 and 1530.

Perhaps the best kept secret of this church is the fabulous 360° view from the 16th century bell tower. Climbing up the narrow spiral staircase is a bit of an effort, but once reaching the top you are rewarded with a unique ‘vista’ of the Ciutat Vella and the bell towers of Santa Maria del Mar, the Gothic Cathedral, the church of La Mercè and Santa Maria del Pi plus the whole of modern Barcelona from the sea to the mountains and up and down the Mediterranean coast. 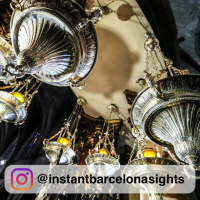 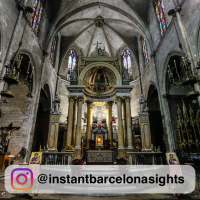