The Sagrada Familia began as an idea. Josep Maria Bocabella i Verdaguer who had formed a religious group at the end of the 19th Century to combat the rise in ‘uncivilised’ behaviour, wanted a temple dedicated to the Holy Family. With donations pouring in, the group purchased a plot of land and on March 19th, 1882, the first stone was laid. 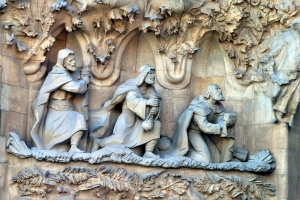 At this point, the design and construction was under the control of Francisco de Paula del Villar y Lozano, the original architect. But after several major arguements with Josep Maria and his group, Francisco packed his bags and left. Cue a certain Antoni Gaudi i Cornet.

Taking over in 1883 and finishing the crypt, Gaudi proposed a radical redesign from the original Neo-Gothic building currently on the plans. After a huge anonymous donation, the Catalan master was given the green light and in 1892 the Nativity Facade was started.

By 1914, Gaudi had plans for the other facades and decided to drop all other work to concentrate on the temple. Construction continued and by 1923 he had designs for the naves and roofs and on the 30th November 1924 the first bell-tower was finished. Little did anyone know 7 months later Gaudi would be dead.

Between 1926 and 1938 Gaudi’s right-hand man, Domenec Sugrañes, kept the work going, but dwindling finances and the Spanish Civil War brought construction to a halt.

After Franco’s victory, building the Sagrada Familia resumed, but at a very slow pace. In 1961 part of the site opened as a museum, so visitors could get an insight into the history and plans. A rising global appreciation of Gaudi and his architecture helped fuel interest in the temple and the 1992 Olympics put Gaudi, Barcelona and the Sagrada Familia squarely on the world map. It has been the city’s iconic building ever since.

Funded entirely by donations and entrance fees, the rate of construction has dramatically increased in recent years and the powers that be are hopeful that the temple will be completed around 2040. Only time will tell.

Buying your entrance ticket in advance is a must. We highly recommend you buy directly from the Sagrada Familia website, that way you guarantee that all your entrance money goes directly to funding the construction and not to a third-party reseller. 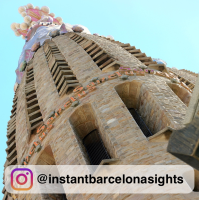 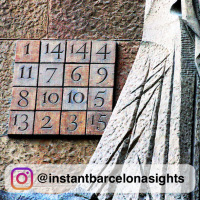